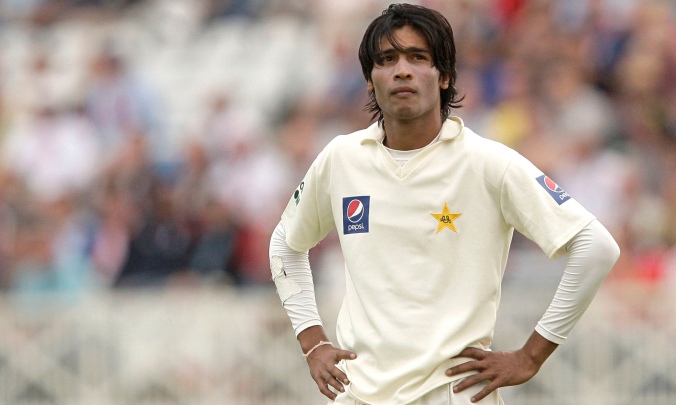 “No! I don’t want to watch that. Let us watch football. Change the channel, please!” he said as I turned on the television and happened upon the highlights of the last day’s play from Lord’s.

It was quite the change from our usual routine for the previous days – a routine that involved us settling down to watch the highlights of the day’s play of the Test match from London. And now, the very highlights were being shunned with a vehemence that was startling. I needed no explanation whatsoever about the cause of this sudden shift in thinking – it had been stamped on my consciousness since that morning. But it was the vehemence that got me.

There shouldn’t have been any surprise there. Not after that morning’s conversation, during which he could muster up only one word as I sat there trying to explain that which had exploded across the headlines that morning. Just one word: “Amir?”, “Amir?” “Amir?” was all that came out of his mouth. Repeatedly.

How I wish I could forget that look on his face when he mouthed it – a look that turned from quizzical to incredulous to shocked and finally to just glum sadness, all in the space of five minutes. If I wasn’t already disheartened beyond belief by what I had woken up to be confronted with on the front pages of every newspaper that morning, that look was enough to push me over the edge.

Was it a look of disillusionment? Certainly not, for the tender age of eleven is too early for that emotion to even take root. In the world of magnets and miracles, that is too deep a concept to even exist. The simplest description of it can only be, hurt. What else could it even be? Disappointment? Maybe. But all I saw was hurt. That something which had been such a brief phase of enchantment, so loaded with prospects and excitement, was now ruined in the worst possible way. It wasn’t even an angry, accusatory look. I wish it was. But it was just sadness. He had clung to Freddie and Bond as his special ones in that brief period, but their knackered bones had failed him. He still had his Tendu. His Rahul. His Sanga. But their twilights were obvious and their departures imminent.

And then there was Amir.

Maybe it was the proximity of his youth? His flop-haired toothy effervescent smile? The delight at his blown kisses at Shane Watson mid-pitch earlier this year? Or maybe just his exhilarating bowling? The glee at Ricky Ponting’s discomfort facing up to him? The categorical dismissal: “This Akmal is not good enough to keep to him”? The bashful smile when he nailed even Tendu?

I had my own Vivian Richards to cling to as I cut my cricketing teeth. My own Michael Holding. And Vishy. They sustained me during those formative years. Handed me off into the hands of the Mark Taylors, the Sachin Tendulkars, the Curtly Ambroses and the Rahul Dravids. When the ugly jolt came, enough time had been spent in their company to weather the dark days that befell the game a decade ago. Without their nurturing, a watershed moment would have come to pass in those terrible days. An interview on television with Sir Colin Cowdrey circa 2000 haunts to this day, and is fresh in the mind. For it was a day when I swore off the sport for life. The speechless anguish on that cultured cricketing persona’s face seemed to snap something in me. I was done with cricket. Or so I had told myself.

But over time, one negotiated a peace and came to terms. “Love at first sight”, the eloquent Gideon Haigh had said about cricket. And it was. So one coped. It had changed everything about the way one approached the game. The cynicism could not be willed away. It tainted everything after that. But one got around it by boring into the core of the sport itself, shunning overt attachments and jingoism, for it all seemed so shallow after 2000.

So one lost oneself in the flick from outside off to midwicket by VVS. In the dazzling smile of the sporting Brett Lee’s admiration of that very shot off his own bowling. In the theater of Warne. In the backfoot coverdrive on the rise by Sachin. In the intensity of the eyes behind Dravid’s grill. In Kumble’s determined jaw. In Freddie’s consoling arm around Lee.

One tried to stick to the essence of these when watching cricket with the new wide-eyed fan.

The events from a decade earlier had been dealt with between us very gingerly. Over time he had understood enough to know that I would never talk about them with him in an open manner. It was always skirted around. Some names were never brought up. Like that of the South African captain who derailed so much, never to be resurrected again. Watching highlights of old matches, be it Sachin’s “desert storm” blitz from Sharjah or the magical assault in South Africa in 1997, were always diplomatically dealt with without mentioning the Indian captain who had broken our hearts.

“You had really liked him, hadn’t you?” was all he had asked a couple of times as we sat watching footage of the artistry of the Hyderabadi. He hadn’t been there to be scarred, but understood enough to know that something had been irretrievably lost and that there was a buried pain there.

It was natural that our pulses had quickened when the flop-haired toothy grin exploded on the scene. It was an exhilaration shared. And I reveled in and relished his new found excitement. Smiled at his “Aww, who cares about the final of the Micromax Cup. Change the channel. Let us watch Amir and Asif bowl”.

One could only hope that another watershed moment wouldn’t come prematurely. I had more living proof now that Gideon Haigh’s words still held true. So the hardened cynicism and jadedness were put away and kept carefully hidden, all the while hoping that the reoccurrence wouldn’t come too soon. Knew it would, but just hoped that there was ample opportunity to build up a locker-full of new memories, to give the new fans a fair shot at weathering the tempest to follow. To allow them to negotiate their own peace. Do their own skirting around topics. That was all one could wish for.

It is a damning indictment of a sport that even such diluted hopes were just naivete after all. Of the extent of the prevailing toxicity in the dressing room that took no time to envelop and wrap arms around a fresh face. How endemic must the malaise be for a raging talent like this – with the cricketing world at his feet, wrapped around his little finger – to be infected in a flash? And what else is left, now that those taking their first bites into the fruits of the game have a crinkled nose of disgust on their faces?

Watching him walk back to the pavilion after being put out of his misery by Swann on the last day, amidst eerie silence at Lord’s, was agonizing. The grim face behind that visor was matched by that of the glum eleven year old sitting beside me watching. In that juxtaposition of the two sad faces lay the tragedy of cricket’s loss.

Our game’s newest generations just got tainted for life.

One thought on “The Hurt Locker”